This post illustrates one of several utility classes that are in the Nito.MVVM library: SimplePropertyPath.

SimplePropertyPath merely propagates an existing INotifyPropertyChanged implementation “forward” to other listeners, and propogates writes “back” to the original property. It is only capable of understanding a “simple” property path: one comprised entirely of member accessors.

Some examples will help clarify how this class can be used; the following “fake ViewModel” class is used by these examples. It just has two properties: “int Value” and “FakeVM Child”, and implements INotifyPropertyChanged:

The API of SimplePropertyPath is rather simple: 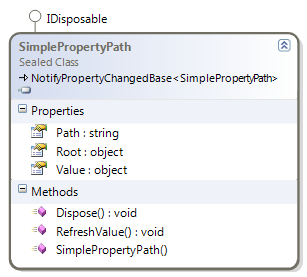 The two properties “Root” and “Path” are used to define the SimplePropertyPath. The “Value” property is used to read or write the nested property.

A simple example to start off with; to read or write the “Value” property on a FakeVM object:

Nothing too difficult there. The next example exercises reading and writing to a longer path:

Now it’s starting to act more like a real binding. Invalid property paths will result in a Value of null (writing errors to PresentationTraceSources.DataBindingSource just like WPF data binding does):

The “childmost” property is not the only one that is being monitored; SimplePropertyPath will monitor INotifyPropertyChanged for each object along the path:

Finally, SimplePropertyPath will raise its own INotifyPropertyChanged for its Value property every time it changes, whether it was caused by a change in the “childmost” property or any of the objects along the path.

SimplePropertyPath is used by the Nito.MVVM library as a building block to construct some of the more advanced classes, such as MultiProperty and MultiCommand. However, it can be useful in its own right.

[Note: all of the examples above were copied almost verbatim from the unit tests in the Nito.MVVM library].