I met a nice fellow at the Microsoft Code Camp in Chicago recently. He had a question about how well the Entity Framework worked with other ADO.NET providers. When I told him that I had a solution working using Entity Framework running on SQLite, he was quite interested. There are a handful of hurdles to get it all working, though.

The first thing you need is an ADO.NET provider for SQLite. There’s an excellent (and free) solution available called System.Data.SQLite. This is actually an ADO.NET 2.0/3.5 provider, and also includes support for the Entity Framework.

Supporting SQLite from a .NET 4.0 Project

It’s often useful to get at the SQLiteConnection being used by the Entity Framework. This is available through the “EntityConnection.StoreConnection” property, as illustrated by this code sample:

Even when using the Entity Framework, there are situations where one wishes to execute SQL commands directly against the database. PRAGMAs are one common scenario; another is updating the schema structure to the latest version.

This is possible one of two ways; once the SQLiteConnection has been acquired (see above), it’s possible to create a SQLiteCommand and execute it:

However, there’s an even easier way of doing this: Entity Framework exposes a method named “ExecuteStoreCommand”:

The official Entity Framework documentation recommends using generic transactions (e.g., TransactionScope). This has some benefits; it can be easily promoted to a distributed transaction, etc.

However, it has a timeout scheme that is not very friendly (I mentioned this a few weeks ago). In my situation, I had to potentially spend quite a bit of time upgrading the client’s database on first run.

Fortunately, SQLiteTransaction works perfectly well with the Entity Framework. My database schema upgrade code now looks like this (referencing the SQLiteConnection from above):

SQLiteTransaction does not have the same timeout restrictions that plague TransactionScope, et. al.

First, you need to enforce foreign keys on your database connection; see the SQLite foreign keys documentation for more information. This is done simply as such:

If you have a SQLite database that does not get its relationships imported, then you’ll have to define them by hand. If your entity relationships are all imported fine, then you can just skip down to the “final notes”. 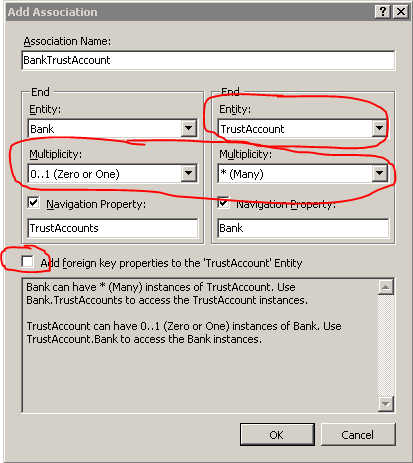 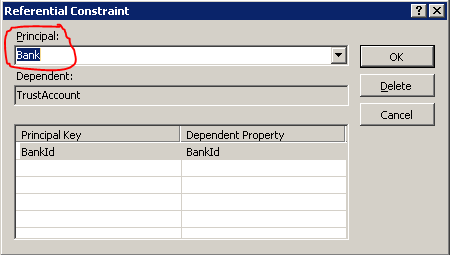 Thanks to the Entity Framework Design team for their blog post on FK Associations; my instructions above are derived from that post.

To convert this join table entity into an M to N relationship, follow these steps:

Once the entity associations are defined (as above), you may freely “update” your model from the database without losing those associations.

When using the Entity Framework with SQL Server, it is possible to detect some foreign key conflicts before they actually hit the database (e.g., a required “parent” reference). I haven’t found a way to get this working with SQLite yet, but it’s not a big deal, IMO.