Update, 2014-05-07: I have been giving it a lot of thought, and I have decided that the Bait-and-Switch approach described by Paul Betts is a better solution than the one described below. This blog post is retained for historical purposes.

I have a long-standing interest in portable class libraries (PCL), because most of my open-source contributions are widely-applicable libraries (including Comparers, ArraySegments, and of course AsyncEx). This post is an explanation of a technique that I learned from Rx; it’s useful for any PCL that is actually a library (i.e., not a portable application).

Portable class libraries are awesome. Now that NuGet supports them, every library writer should join in!

Portable Class Libraries enable you to create a single binary that runs on several (.NET) platforms. Unfortunately, it uses the “least common denominator” approach, which means your PCL is greatly constrained in what it can do. In order to “step outside” these restrictions, you need some way for a platform-specific assembly to provide functionality to your PCL core. The obvious answer is to use inversion of control, but how are the (platform-specific) implementations created and passed to your portable code?

There are several ways to do this. Daniel Plaisted has a great blog post that gives an overview of different solutions:

The first three approaches depend on the consumer of the library implementing the platform services (or at least instantiating them) and providing them to the portable library: 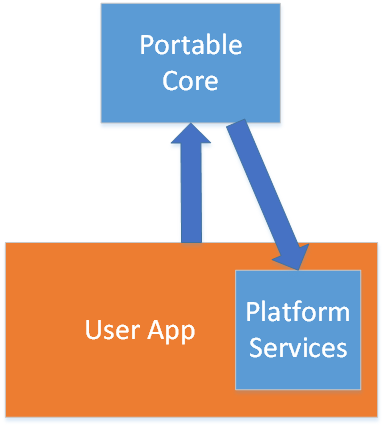 This is fine if your PCL is just the core of a portable application, like Daniel’s “Disentanglement” application, where the PCL contains the logic but its “entry points” are just a handful of ViewModels.

But I’m not a fan of this. When I distribute a library, I want users to just add it via NuGet and start using it; requiring “startup” code is a big barrier to adoption.

AFAIK, the Rx team was the first to solve this problem. They describe their “Platform Enlightenment” approach well on their blog (section “Intermezzo - The refactored API surface”). Members of the PCL team have referred to this technique as “Platform Adaptation”. 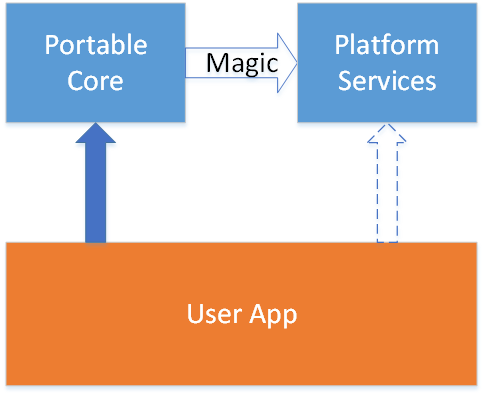 The “dashed arrow” in the diagram above means that the user application has a reference to the platform services library, but does not actually use it. The “magic arrow” does not exist at compile time (so there’s no actual reference there); this will be explained later.

Let’s start out with a simple enlightenment called “Bob”. We’ll create a portable class library (called “MyLibrary”) that will act as our Portable Core and define the “Bob” enlightenment interface:

As an aside, my enlightenment-related types are mostly public, but they are within a special namespace, which indicates to end-users that they are not part of the normal API.

Multiple enlightenment types means that it’s useful to have an “enlightenment provider” (also platform-specific, with a default backup), which just creates instances of the enlightenments. The IEnlightenmentProvider type is defined in the Portable Core:

(We’ll come back to the implementation of CreateProvider in a moment).

This setup means that from within my PCL Core, I can consume enlightenments easily:

Note that my enlightenment manager implementation is forcing some assumptions on both the enlightenment provider and every enlightenment: they are conceptually singletons, except that they can be constructed multiple times (due to race conditions); in that case, only one instance will be used and all extra instances will be discarded. These are not difficult assumptions to satisfy, but you do need to be aware of them.

Having a default implementation is important! If an application developer removes your platform-specific assembly from their project’s references, then you will end up at runtime with just your PCL core, and you need to handle that scenario gracefully.

In this case, you’ll need a default provider to step in and provide some kind of reasonable default behavior. I’m not a big fan of NotSupportedException, and I recommend avoiding it as much as possible, but in these cases it may just be necessary.

For our simple “Bob” enlightenment, let’s just return an empty string as our default behavior. Again in the Portable Core:

Usually, there’s some form of reflection going on in a default enlightenment instead of being this simple.

At this point, we create providers for each of the platforms that need one. So let’s assume that “Bob” wants to say hi from a specific provider, like .NET 4.5.

Now, let’s take a look at that CreateProvider method in the Enlightenment class. This is the “magic arrow” from my diagram:

What we want to do is determine which assembly contains the platform-specific enlightenment provider, and create an instance of that type.

Here’s a very simple example, if MyLibrary had a portable core supporting .NET 4.5 and Windows Store, with different enlightenment assemblies for each:

It’s Best to Be Sure

Our CreateProvider should be able to load the enlightenment in normal situations. But we all know how other developers can mess things up, right? ;) What if they’re doing some funky assembly loading from subdirectories so that we can’t find the enlightenment?

We can provide some level of assurance by allowing a single line of “startup” code. Of course, this is optional; CreateProvider does not need it in most cases, and we always have the default enlightenments to fall back on.

In each of my platform enlightenment assemblies, I define a single method in a normal namespace (i.e., not hidden from the user):

This method simply checks to make sure its platform enlightenment is the one being used. Just to be sure.

Only enlighten the behavior you need. My Lazy<T> enlightenment only has one constructor and two properties; it only supports one thread safety mode and is allowed to invoke its factory while holding a lock. This is significantly simpler than the Microsoft Lazy<T>, but my Portable Core doesn’t need any more than that.

Most default enlightenments need to use reflection. It’s best to use reflection only on startup and cache delegates for future use. I use the “compile Expression to a delegate” technique described by Eric Lippert in this SO answer. Just be sure to watch your exceptions when doing the reflection!

Enlightenment assemblies can be difficult to test if they use reflection for upgrades. Ideally, you would test a combination of target platforms with runtime capabilities, and do that testing for both the platform-specific enlightenments and default enlightenments. Consider a distributed testing system.

If you use enlightenments the way I’ve described in this blog post, keep in mind that they are conceptually singletons. This means that if you’re enlightening a type (e.g., Lazy<T>), you first need to define a portable interface and then have your enlightenment act as a factory.

It’s perfectly fine to have your platform enlightenment assemblies be portable libraries themselves. My AsyncEx library uses the same portable assembly for enlightenment on .NET 4.5 and Windows Store.

If you’re modifying an existing library to have a portable core, you should keep open to refactoring. In particular, if you implement interfaces that aren’t available on some of your target platforms, those types may be a better fit for a “slightly less portable” additional assembly. I did this with the Dataflow types in my AsyncEx library; I have a “fully portable” core (Nito.AsyncEx.dll) and a “less portable” additional assembly (Nito.AsyncEx.Dataflow.dll). This is mostly transparent to users (at compile time) because both assemblies are distributed in the same NuGet package.

Daniel Plaisted’s blog post How to Make Portable Class Libraries Work for You.

The Portable Class Libraries Contrib project has a “Platform Adaptation” implementation (under Source/Portable.Runtime/Adaptation).