On the “personal achievement” side of things, I’m pleased to announce that I’ve been given the Microsoft Most Valuable Professional award for C#. 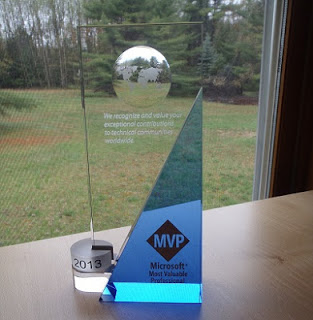 I’ve read about the MVP award before (both good and bad), and I thought I’d write out my own perspective of what it is and is not. (I’m just talking about the “programmer” MVPs here, e.g., C#, VB, etc., not the “user” MVPs, e.g., Excel).

It’s Not: A Certification

A certification is something you earn. I hold a number of Microsoft certifications, which I earned by practicing and studying and then passing exams. Certifications (attempt to) measure a skill set, and achieving a certification indicates that one has those skills.

The MVP award is different. The MVP award is given to people who have had an impact on technical communities through their willingness to help others. It’s a much fuzzier definition; there’s no specific set of actions that anyone can do that are guaranteed to “earn” them an MVP.

Another difference is that there’s no limit to the number of certifications. Every person in the world could decide to get a Windows Store Apps certification, and that would be fine.

In contrast, there is a definite limit to the number of MVPs. As of now, there’s only about 3,800 MVPs worldwide. Also, the MVP award is a yearly award, so if an MVP stops contributing to the technical community, then they may not get their MVP status renewed the following year.

It’s Not: A Super Programmer Designation

Being an MVP actually has little to do with being a great developer. A lot of other people have criticized the MVP program for letting in less-than-stellar developers (and in some cases, non-_developers). But that seems fine to me; the primary filter for being an MVP is not programming prowess; it’s how much you help _other developers.

It’s Not: A Way to Control Microsoft

If you read some of the writings out there by former MVPs, you’ll find that a number of them think the program is useless because MVPs don’t get to drive the decisions at Microsoft. It is true that MVPs have (slightly) more access to Microsoft personnel than average developers, and (at least in the past) some Microsoft product groups have invited feedback from MVPs, but that doesn’t mean that the MVPs control the decisions. At the end of the day, Microsoft will do what they think is best for Microsoft.

Similarly, MVPs have access to a lot of NDA information, but Microsoft does not share everything with its MVPs. MVP leaks are a historical fact, and when Microsoft has a game it’s playing close to the chest, of course they don’t release the details to MVPs before the hand is played out. In the past this has caused some hurt feelings among MVPs, since they were purposely kept in the dark for strategic reasons.

My take on this is simple: an MVP award does not entitle the holders to any secret information or influence on product development. If you do get this as part of your MVP, bully for you and make good use of it! But if not, well, you’re just not entitled to it. Every MVP area (e.g., C# vs F# vs Windows Phone vs Azure) is different and interacts with its MVPs differently; some have access to NDA material, some have input on product design, some get advance warning of game-changers. Others don’t.

It Is: A Recognition

The MVP award is primarily a recognition for work you’ve already done over the previous year. It doesn’t really come with any guarantees; it’s just recognizing work that’s already been done.

Personally, I was honored to receive the MVP award. For the last few years I’ve thought it would be nice to be an MVP, but I decided I would never nominate myself, nor would I ask (or hint) for anyone else to nominate me. Rather, I’d just be myself and let the chips fall where they may. I still have no idea who nominated me as an MVP, but thank you, whoever you are.

A nice side effect of the MVP award is that I get a lot of really cool toys; a lot of the popular tools provide free MVP licenses, and this really lets me explore a lot of things I’ve only read about. IntelliTrace, here I come! :)

I just have to include this point because I literally laughed out loud while unpacking my MVP award.

The photo at the beginning of this post is my actual (physical) MVP award. The circular year part comes off, like so: 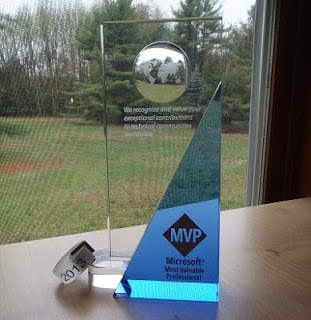 I assume this is done so that the big, heavy part of the award is only given once and if you are still an MVP next year they only send you another little circular part.

Just in case any MVPs couldn’t figure out how to assemble the award, Microsoft was kind enough to include instructions: 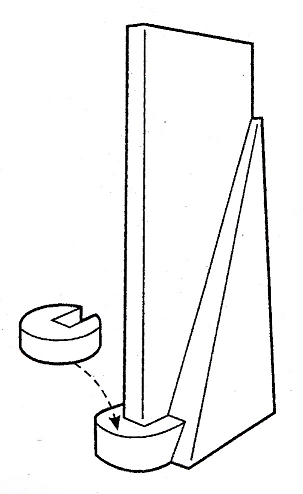