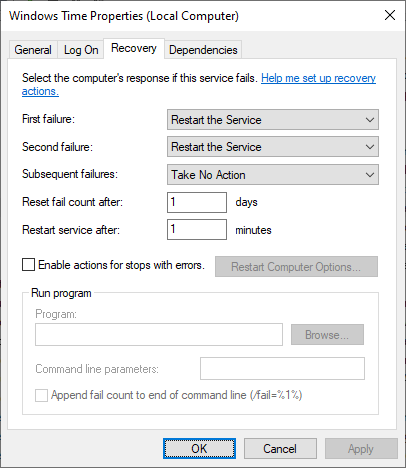 However, it can be a bit confusing to think about what “fail” actually means.

It’s pretty clear that if a Win32 application crashes, that indicates “failure”. Normally, Win32 services communicate with the SCM and let it know what their state is. The most common states are “stopped” and “started”, along with transitional states like “stopping” and “starting”. So, if a Win32 application exits (or crashes) without telling the SCM it is “stopped”, then the SCM treats that as a failure.

What’s much less clear is how exit codes are handled.

There is a flag you can set that will cause SCM to honor the Win32 service exit code, treating a non-zero code as a “failure” and running its recovery actions. You can turn this flag on at the command line as such:

Setting that flag checks this checkbox, which has the rather difficult-to-understand wording of “Enable actions for stops with errors.”: 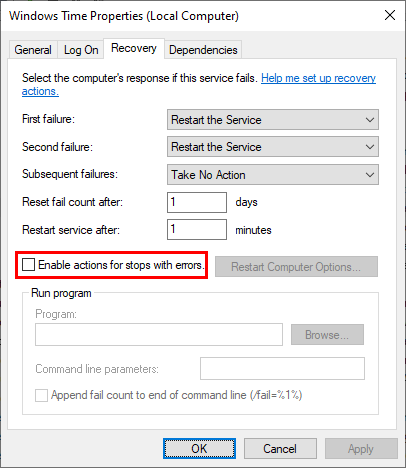 In .NET Core applications that are run as Win32 services, it’s normal to call IHostBuilder.UseWindowsService(), which installs a WindowsServiceLifetime as the IHostLifetime, instead of the default ConsoleLifetime.

WindowsServiceLifetime lets the SCM control the starting and stopping of the .NET Core application. It derives from ServiceBase. Since multiple IHostLifetime instances aren’t supported, this means that .NET Core workers do not naturally support multiple Win32 services in a single process. It may be possible to support that by creating a new type that derives from ServiceBase and IHostedService, along with some kind of coordinating IHostLifetime implementation, but I’m not aware of anyone doing that yet. For now, all the .NET Core Win32 services I know of use WindowsServiceLifetime.

You can write code that will set the Win32 service exit code on failure by accessing ServiceBase.ExitCode as such:

However, as noted above, you have to also set the failureflag on the service, or else the SCM will ignore the non-zero exit code.

If desired, you can write a custom WindowsServiceLifetime that will treat non-zero Environment.ExitCode values as non-zero Win32 service exit codes:

This can be installed by adding this service (services.AddSingleton<IHostLifetime, MyWindowsServiceLifetime>()) after calling UseWindowsService; the .NET Core dependency injection will just take the last registered IHostLifetime.

It is also possible to create a custom derived WindowsServiceLifetime that can detect application failures and will prevent ServiceBase from sending the “stopped” message to the SCM. That way, your service will be restarted regardless of the failureflag setting, because any failures will cause the process to crash.

We don’t want to crash the process immediately; instead, we want to shut down the .NET Core host and then terminate, so that the SCM knows the process failed. The WindowsServiceLifetime type has some similar behavior: if the SCM requests the service to stop, then it will shut down the .NET Core host and wait for it to stop. We can do the same thing in our custom lifetime type:

This kind of MyWindowsServiceLifetime implementation will work whether or not you set the failureflag on your service.