Last time, we looked at some archaic ways to start Delegate Tasks. Today we’ll look at a few members for creating Delegate Tasks in more modern code. Unlike the task constructor, these methods return a Delegate Task that is already running (or at least already scheduled to run).

First up is the oft-overused TaskFactory.StartNew method. There are a few overloads available:

The overloads containing an object parameter simply pass that value through to the continuation delegate; this is just an optimization to avoid an extra allocation in some cases, so we can ignore those overloads for now. That leaves two sets of overloads, which act like default parameters for the two core methods:

StartNew can take a delegate without a return value (Action) or with a return value (Func<TResult>), and returns an appropriate task type based on whether the delegate returns a value. Note that neither of these delegate types are async-aware delegates; this causes complications when developers try to use StartNew to start an asynchronous task. 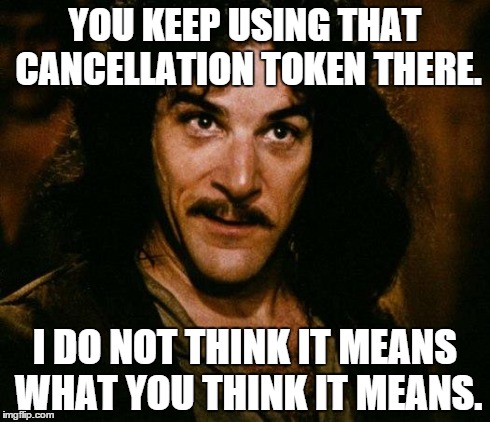 OK, that was a bit much to describe in words. If you want to see the same details expressed in code, see the unit tests in this gist.

However, this difference in behavior does not impact your code as long as you use one of the the common patterns for detecting cancellation. For asynchronous code, you’d await the task and catch an OperationCanceledException (for more complete examples, see the unit tests in this gist):

For synchronous code, you’d call Wait (or Result) on the task and expect an AggregateException whose InnerException is an OperationCanceledException (for more complete examples, see the unit tests in this gist):

In conclusion, the CancellationToken parameter of StarNew is nearly useless. It introduces some subtle changes in behavior, and is confusing to many developers. I never use it, myself.

There are a couple of “scheduling options” that are just passed to the TaskScheduler that schedules the task. PreferFairness is a hint asking for FIFO behavior. LongRunning is a hint that the task will execute for a long time. As of this writing, the TaskScheduler.Default task scheduler will create a separate thread (outside the thread pool) for tasks with the LongRunning flag; however, this behavior is not guaranteed. Note that both of these options are just hints; it is entirely appropriate for the TaskScheduler to ignore them both.

There are a few more “scheduling options” that are not passed to the TaskScheduler. The HideScheduler option (introduced in .NET 4.5) will use the given task scheulder to schedule the task, but then will pretend that there is no current task scheduler while the task is executing; this can be used as a workaround for the unexpected default task scheduler (described below). The RunContinuationsAsynchronously option (introduced in .NET 4.6) will force any continuations of this task to execute asynchronously.

The “parenting options” control how the task is attached to the currently-executing task. Attached child tasks change the behavior of their parent task in ways that are convenient in some dynamic task parallelism scenarios, but are unexpected and awkward anywhere outside that (extremely small) use case. AttachedToParent will attach the task as a child task of the currently-executing task. In modern code, you almost never want this option; more importantly, you almost never want other code to attach child tasks to your tasks. For this reason, the DenyChildAttach option was introduced in .NET 4.5, which prevents any other tasks from using AttachedToParent to attach to this task.

The following code first creates a UI task factory to schedule work to the UI thread. Then, as a part of that work, it starts some work to run in the background.

The output on my system is:

In conclusion, I do not recommend using Task.Factory.StartNew at all, unless you are doing dynamic task parallelism (which is extremely rare). In modern code, you should almost always use Task.Run instead. If you do have a custom TaskScheduler (e.g., one of the schedulers in ConcurrentExclusiveSchedulerPair), then it is appropriate to create your own TaskFactory instance and use StartNew on that; however, Task.Factory.StartNew should be avoided.

Update, 2015-03-04 (suggested by Bar Arnon): If you do choose to use StartNew (i.e., if you need to use a custom TaskScheduler), bear in mind that StartNew does not automatically handle asynchronous delegates. To run asynchronous code on a custom task scheduler, you’ll need to use Unwrap.

Task.Run is the modern, preferred method for queueing work to the thread pool. It does not work with custom schedulers, but provides a simpler API than Task.Factory.StartNew, and is async-aware to boot:

There are three axis of overloading going on here: whether or not there is a CancellationToken, whether the delegate returns a TResult value, and whether the delegate is synchronous (Action/Func<TResult>) or asynchronous (Func<Task>/Func<Task<TResult>>). Technically, Task.Run does not always create a Delegate Task; when it is given an asynchronous delegate, it actually returns a Promise Task. But conceptually, Task.Run is specifically for executing delegates on the thread pool, so I’m covering this set of overloads along with StartNew (which always does create Delegate Tasks).

The CancellationToken parameter sadly has the same problems described above for StartNew. That is, it really only cancels the scheduling of the delegate, which happens almost immediately. The presence of the CancellationToken argument does change the semantics slightly, similarly to StartNew. The full unit tests are in this gist, which has only one result that may be surprising: if an asynchronous delegate explicitly observes a CancellationToken, the returned task will be canceled instead of faulted. Just like TaskFactory.StartNew, these minor differences in semantics don’t matter if the consuming code uses the standard pattern for detecting cancellation.

So, I conclude that the CancellationToken parameter of Task.Run is pretty much useless.

However, the other overloads are quite useful, and Task.Run is the best modern way for most code to queue work to the thread pool.

A Tour of Task
About Stephen Cleary